Actually this is a mail that i sent to a friend(Mr Ray Barlow) a couple of months back(when the whole tourism debate was at its peak) on Unregulated Wildlife Tourism,he put the mail on his blog and there I received some very encouraging comments.So i decided to reproduce that mail here on sanctuary (so please ignore the casual language of the piece as it was a mail)

These four pics are from Kanha Tiger Reserve. Now, I like going into the relatively unknown wildlife sanctuaries and national parks that are out of the public eye precisely to avoid this mad rush of tourists and observe nature closely and in solitude. This trip to a well known tiger reserve was after a gap of almost 5-6 years and even though I will accept the fact that the park is extremely rich in Wildlife, I was extremely disappointed with the extreme mismanagement of Tourism:

1st pic--- This first pic at the entry gate was itself very disturbing-- "Tiger Show"-- I felt these were insulting and degrading words to be used for a WILD TIGER--- a Tiger Show is a term used in circuses or in some zoos. This was an ominous sign of the things to follow. 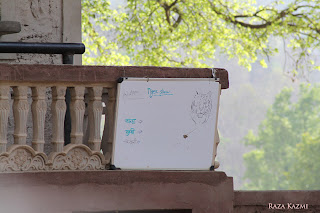 2nd pic---- Now, I reached a the park a bit late (the tourists enter early in the morning by 6:00 am and come back by 10:00) at 8:00am, so the forests roads were bereft of the tourist bustle and perhaps I was lucky enough that this brief calm prompted a tiger to come out....I was elated and had just snapped a few pics when suddenly a tourist gypsy arrived and within 10 minutes from nowhere, gypsies started pouring in......and I could see this tiger getting extremely uneasy and panicky. 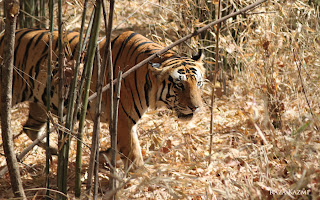 3rd pic---- This was the situation within 10 minutes of tiger sighting....a traffic jam of sorts...I roughly made a count of the gypsies and the number was staggering 35. My guide insisted the driver that we somehow manoeuvre our way through this traffic jam of sorts to get a view of the tiger and that is when I asked him that I had had enough, i didn't wish to be a part of this foolishness. Even though the guide was dismayed by this, he reluctantly asked the driver to move out (still giving me perplexed looks!!).I told him to take me to some quiet place where I could observe the forest in peace even if it meant maybe seeing just a squirrel. On our way out, I saw at least 10 other gypsies whizzing pass us to be a part of the "Tiger Show". 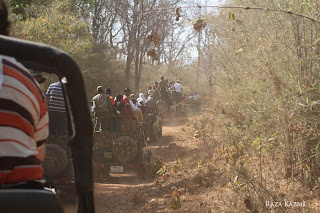 4th pic--- This pic was just before we moved out, the tiger obviously extremely agitated and traumatized was unsure of what he should do.....what I have known after observing the behaviour of wild animals in the past 15 years, this guy was looking to cross the road. But the mad rush of gypsies that were standing right on the path which he wished to cross, a large no. of tourists heckling at the poor creature so that he would look towards them, loud noises of the accelerators---- all this weren't allowing him to do so and so tired and confused he went inside the small concrete water pipe under the road and wasn't ready to come out----so the tourists started heckling and shouting and the tiger again came out of the pipe.... 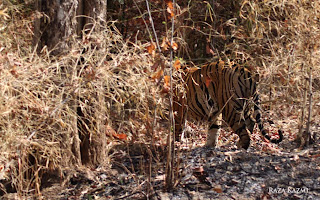 Somebody asked me so what if this is happening, the tiger will be away from the tourist eyes for most of the day....this ordeal is just for maybe an hour or so....but the repercussion of this is that the animal undergoes huge trauma (and this trauma is just like the trauma that a human undergoes when he is robbed, heckled, etc.) and just like humans, it takes days for the animal to overcome this trauma, but as the tiger is a territorial animal(much like the other big carnivores of India)so he can't move out of this tourist zone.

It will in all probability face this trauma all over again in a couple of days, even before he could recover from the last experience and this leads to poor reproduction as it has been scientifically proven that traumatized animal can never breed properly......with the tourist pressure growing with each passing day, there is pressure on authorities to open up new areas of the parks for tourists and this will lead to even more tigers facing the same situation and with that the breeding capacity of the tiger will deteriorate and they will eventually die out........another aspect of this is that the tourist lodges and resorts coming up near the park to cater to the huge influx of tourists are encroaching upon forest land, cutting down the forests and choking vital wildlife corridors with their constructions.....so responsible and regulated tourism helps in keeping a check on the health of the park as this keeps the authorities on their toes, but unregulated tourism will ultimately lead to the destruction of what it thrives on......

The next day i read the news that forest minister Mr. Jairam Ramesh has announced that unregulated tourism is among the three top threats to our fauna (the other two being poaching and habitat loss) and that he will stop this unregulated tourism.....this did bring a smile on my face.....

So that's the hazard of unregulated tourism that plagues some of India's finest wildlife habitats.......Hope you spread this word among others!!!!

Thank you Sir for going through the piece, yes you are absolutely right, some of the aforementioned steps would go a long a way in solving this problem that ails most of our star-reserves.

Dear Raza, I have also observed similar things in various tiger reserves. I think to increase the entry fee, extra fee for Sundays and public holidays and restricting nos. of vehicle entry are some of measures that can resolve this problem. Beside this tourist who are found disturbing wildlife should be fined & shown the exit door.